Do phytoplankton species have parasites?

However difficult to observe, parasites of phytoplankton have been largely overlooked by aquatic ecologists. Consequently, their diversity and ecological role remain poorly studied. Additionally, climate-related changes in salinity and temperature are expected in a variety of coastal ecosystems, particularly in the Baltic Sea. The potential impacts of such changes on the interaction between parasites and their phytoplankton hosts are currently unknown but may have important effects on community composition and infection dynamics, resulting in significant alteration of ecological processes within the entire ecosystem.

Thus, our ASSEMBLE-project “Phyto-Parasite” originated within the context of the apparent differences between phytoplankton parasites in freshwater and marine environments. We have gathered an international team of limnologists and marine scientists with expertise in both chytrid and perkinsid parasites to perform the first extensive screening on zoosporic parasites of phytoplankton in the northern Baltic Sea. The Baltic Salinity gradient is an ideal system to study the role of salinity in parasite community transition.

Our team seeks to examine fundamental questions regarding phytoplankton parasites: Which species are present? What is the relative abundance? How do they potentially contribute to the decline of phytoplankton blooms in the Baltic Sea? In order to address these questions and more, we are performing a field study, which includes selected sites of nearly freshwater conditions and brackish salinities, and laboratory experiments that aim to further investigate the role of salinity in phytoplankton-parasite communities and infection dynamics.

As a result of our study, we hope to contribute to the improvement of current and future predictions of phytoplankton blooms and food web dynamics in the wake of global change. 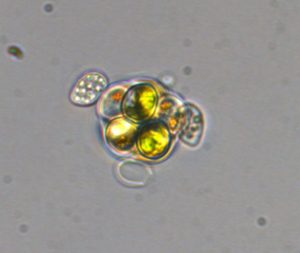